Sometimes it is good for an author to remind himself what he wanted to do with a book before looking back over the pages to see how far he missed his mark (and I’m pretty sure that every writer worth reading believes that the mark got missed) so, to that end….

I started PLENUM to test myself: I’d spent years pruning code in the vineyards of  Information Technology, and when I was ready to write again, I suffered a crisis of confidence every time I opened a word processor. Writing PLENUM was an attempt to cure myself. If I’d known that the cure would take almost three years, several rewrites, and over a hundred and sixty thousand words, I’d probably have looked for a quicker fix — a novella, a collection of short stories, or maybe just jumping to a new track altogether: nuclear opera or faith-based physics. Unfortunately, I am not blessed with that degree of foresight, so I began PLENUM as a novelization of a script I did back before Noah’s flood called The Game of Knights and Dragons.

The basic story I wanted to tell is as old as the novel itself: Boy is kidnapped and taken on a strange journey where he must slay dragons and knights alike to save a string of very scary damsels in distress while struggling to find his way back to a home that may no longer exist. Sure, the tale has been told a million times, but I figured if I avoided pure fantasy and made each of the damsels prettier and scarier than all the others, and also if maybe the Knights and Dragons hated each other more than Democrats and Republicans, and were just as reluctant to work together, even to save the Universe, and if the hero was actually smart enough not to fall in love with the first damsel to sneak under his cave bear skin blanket, but at the same time, just to add a touch of realism here, dumb enough to fall for the totally wrong damsel when he did fall, then maybe, just maybe, I’d write a story that folks would be willing to pay less than the price of a bag of movie theater popcorn to read. And it might help if I told the part about where Cleopatra stood on a palace wall and tempted our hero with a vision of the Roman Empire, and the part where Julius Caesar kicked his ass out of Rome and all the way back to 3000 BC. So I did.

I think that part of PLENUM came out okay. It hit the mark pretty squarely, which was maybe not so much of a challenge given the size of the mark. It is the rest of the challenge that wakes me in the middle of the night and keeps me twitching for hours, the part of the story readers aren’t supposed to notice unless they are cursed with the author’s intellectual kink and have a bad squint besides. Do the readers see a philosophical farce — a hierarchical examination of emergent realities without supposing there is anything higher about one end of the hierarchy? Do they snap that the fundamental phenomenon is emergence, and that the necessary pre-existence of the antecedent before the emergent is an artifact of our preference for seeing time as an arrow rather than a landscape? Does it occur to anyone that we dine with Judy regularly and suppose that Judy is still Judy, setting aside the sure knowledge that today’s Judy is composed of a different collection of atoms and molecules arranged in a bunch of new cells and the nagging suspicion that she’s done something different with her hair? Do they lay the book down with an uneasy suspicion that subsequent never ever equals consequent, even out here in the real world? I certainly hope not. 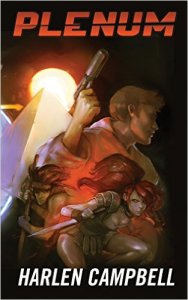 I killed an ant this morning and
The sun still shines,
The breeze remains sweet,
The sea beats against the sand,
But not for the ant
I killed this morning

The World of PLENUM

When Art Penn was recruited (he’d say shanghaied) by an old Dragon named Morl back in 1999, he found himself trapped in a time war with the Knights over the Prime Context, the most probable human future. The context split into two time lines in 3092, four hundred years after the end of the worst catastrophe in any of the human contexts left mankind on the brink of extinction. Six centuries of religious slaughter and environmental collapse had left the few hundred million survivors with no hope of recreating the glorious technology of the twentieth century. All the easily accessible minerals and energy sources had been depleted. Almost all the books had burned. Only a few religious documents survived and even those were suspect after the centuries of carnage they inspired. Both the Knights and Dragons regarded that as a good thing.

Hopes remained, however. Dreams. Men told stories around the camp fire, stories of a golden age when fabulous animals filled the world and men created light just by wishing for it and pounded the earth itself into weapons of unimaginable power. Women whispered around the community hearth of a time when disease could be twisted like a hungry worm and made to feed on itself, a time when the secrets of life commanded even Life itself, and designed plant and animal alike to serve human ends.

The age of great machines was over but small machines were still possible, and if the oil and uranium were all gone then dreams must power the future. Small machines grew smaller and smarter. The code of life was edited, snipped and rewritten. The distinction between man and machine began to blur. At the same time the definition of humanity was rewritten: redesigned flesh incorporated the poorly-remembered dream. The trends coexisted for a time, but the tension between them grew until they could not share the world. In the year 3092, the human context split in two. One future belonged to the Knights and in it human consciousness, mind, abandoned biology and spread into the physical universe. The other future belonged to the Dragons. In it, human life began to incorporate the non-human world. Organic consumed inorganic and mind drifted away from machine.

For good or ill, we humans are locked into our private histories, the time lines into which we are born. Neither the Dragons nor the Knights were aware of the context split until emissaries from their distant futures opened the tunnel that touches every point in space and time. They revealed a larger universe, the context of all contexts, in which their time lines were slowly becoming less probable. One fruit of that revelation was a war over which context would dominate the human future, a war that spanned a thousand human centuries and all the countless human histories. Another was Arthur Penn, born in Chicago, veteran of America’s wars in the middle east, Dragon battles in ancient Rome, stone age Europe, and the depths of the last ice age, and beloved of a true woman, a Dragon woman, and . . . something else.