After many months of issues and travel, including a peculiar failure of my WordPress installation, I have begun clawing my way out of the grave. I’m not yet sure whether this is a true resurrection or just the next step in an on-going zombification. In either case, I hope to see more of you here soon.

Unless we think about it, time seems pretty straightforward. The future is stuff that hasn’t happened yet, the past is the stuff we remember or can discover, and the present is what we’re experiencing right now. Couldn’t be simpler, unless…. What does ‘right now’ mean?

Let’s look at an example. Lightning splits the sky, two distinct bolts in one flash. Can we say that they happened ‘Now?’ They strike our consciousness at the same moment, so at least in that sense they share a present, but do they share the present?

It’s a matter of perspective.

We see the moon by light reflected over a second ago. The sun we see now has already slipped some nine minutes into the past. The nearest starlight began its journey over four years ago. Everything we sense—the mountain outside our window, the annoying buzz of a fly in the room, the pinch of an uncomfortable shoe, even the screen we’re reading on—exists in our past: the tiny fraction of a second it took the light or sound to reach our nervous system and a longer fraction of a second it took to integrate the sensations into our consciousness. Given all this, what does now mean?

Our intuition is that some magical instant exists in which things happen: stars explode, a planet spins, leaves fall. We see things happen now even as we realize they are already part of then. We assume, when we aren’t thinking about it, that the moment we live in is now, even if we won’t see the star explode for thousands of years, the planet spinning for hours, the leaf falling for a fraction of a second after it separates from the tree. When we do think about it, things get really confusing. Light strikes our eyes and sound our ears a tiny fraction of a second before the nerve pulses can arrive at our brain. Once the signals reach our brain, we spend about a fifth of a second processing them, and then the resulting sensations must be integrated into our awareness. As a result, we have to conclude that the magical instant when things really happen exists just a little way into our future. In other words, if we define now as the moment in some universal time when the different things we experience actually happen, we have no direct evidence that now exists. We only reason that it must, that the sequence of sensations impinging on our awareness must have a source in the external world, a source hidden a few hundredths of a second in our future.

This conclusion becomes even more troubling if we ask a physicist for clarification. It might have been easier when we lived in a nice, simple Newtonian universe and time flowed smoothly from past to future, second by second. Einstein changed all that when he announced that time moves at a different pace depending on how fast we move or how strongly gravity curves the space-time continuum around us, and it moves at a different pace for everyone. We might see two lightning bolts as striking simultaneously but, for an astronaut speeding by fast enough, one bolt would strike a tiny, but measurable, time before the other. And we’d both be right.

What does that mean? We can accept, sort of, that our psychological present is not exactly the same as the real present, what is actually happening out there in the real world, but it is disturbing to realize that scientists, who should know, admit that real time is relative. It depends on where you are and how fast you’re moving. Then we realize that while all those scientific equations describe how a system will change over time, they have no preferred time. No now.

For a physicist, time is what clocks measure, no more and no less. Their theories are expressed in equations that describe change over time and are evaluated on how well predictions match measurements. It makes no difference what time is entered into an equation or if the time variable increases or decreases. The equations are just as accurate when we look back in time as when we look forward. We can measure the mass, location and velocity of a comet, for instance, and be very sure where it was yesterday and where it will be tomorrow, but only have a general idea where it was a hundred years before our measurement or where it will be in another hundred years. For the purpose of tracking comets, at least, now is not the moment the light we observe left the sun, and it is not the moment it was reflected from the comet. For the scientist, now is the moment we take the measurement, the moment we have maximum information about the system. That is time zero in the equations. Not the moment the comet was actually at the place shown by the measurements and definitely not the approximate location projected by the equations a day or a week later.

Like our psychological now, the scientist’s now lags behind events. Both incorporate sensations on the one hand and measurements on the other that presumably originated sometime between a fraction of a second and 13.8 billion years ago. Events inform our psychological now as they enter our awareness, our memory. Events impact the scientist’s now as they are measured. In both cases, they have already passed into then by the time we can think now, and everyone involved, scientist, philosopher, or man on the street, takes the existence of a magical intersection between anticipation and memory on faith. 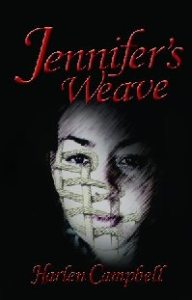 Jennifer’s Weave is technically a sequel to my first published book, Monkey on a Chain, but it is a bit more closely tied to Monkey than is usual for series books. That happened because the main character, Jennifer Murphy, first appeared in Monkey as a stock figure designed to emphasize Porter’s isolation, but she kept pushing back into the story, until by the end of it she was helping April count a fortune in jewels on Porter’s kitchen table.

Normally, that would be a good enough ending for a minor character, but it wasn’t enough for Jenny. When I began planning Rainbow’s second adventure, she pushed her way into the new story. It wasn’t hard. Her character was intelligent and just as far from conventional society’s norm as Rainbow himself, though in a different direction. After all, when she pushed into Rainbow’s house at the end of Monkey and found April, stark naked, happily running her fingers through a mound of diamonds and rubies, sapphires and emeralds, she didn’t apologize and run. No, she asked, “Can I play?”

She was a puzzle I had to explore, so when I needed a convenient spot to drop the corpse that triggered the next book, I picked her kitchen floor. But no dead man exists in isolation. Each lies at the heart of a constellation of questions: Who was he? How did he come here? Who loved him? Who hated him? What part did he play in the life of the woman who found him and ran?

That was enough for a start, anyway. I began writing, and within a few pages a detective with the NM State Police gave the dead man a name: Juan Murphy. Suddenly there was a connection between Jenny and the body, and her character became far more complex.

As I wrote, the first part of the story reflected my interest in Jenny. I’d made her a weaver without knowing why, but that occupation suddenly made sense. What had been a random choice became a metaphor, and Porter’s search for a killer hinged on his ability to read the warp and the weft of the choices that formed the fabric of her life.

I’d always seen Rainbow Porter as a damaged character. In Monkey, I imagined him as damaged by the war. With the new story I realized that the war was just the blow that fractured him, much as a sculptor’s hammer will break a marble slab along a hidden fault. In Porter’s case, that break didn’t weaken him so much as it left him with sharper edges. He became more dangerous, less human. Jenny was affected differently. What shattered her psyche left her unable to accept a complete human connection; she could love, but she would not be loved, and the two flawed characters were not compatible. As you might imagine, this sort of realization can complicate the process of writing a book.

When it became obvious that Porter and Murphy had no future to offer each other, I began to wonder what kind of woman could fit into his life. About the same time, the book started feeling like it was running a little short. The search for Jenny had Rainbow running all over central New Mexico, but all sorts of clues were pointing to California. Jenny’s father and brother lived in Santa Barbara. Her first husband and the daughter she abandoned were there and her third lived in the San Francisco area. Questions needed to be asked and Porter couldn’t ask them, so he hired a P.I. in Los Angeles to do the job. That’s where Sharon Coulter came in. Like Jenny, she also started as a character of opportunity, an ex-cop from LA working as a P.I., but she quickly became an opportunity to explore another side of Rainbow Porter.

Suddenly I had a new subplot. Porter and Sharon replaced Porter and Jenny. My problem with a short word count disappeared, but the new character was a cipher. All I had was a rough description and her name, Sharon. That was enough to keep me typing, but the woman still needed a character and I had no idea how she’d fit into the story. Then Sharon and Porter walked into a restaurant in Sausalito and Sharon limped as she walked.

When I asked her (and, yes, authors do talk to their characters) I learned about the car thief who’d run her down, destroyed her hip, and ended her career with the police force. More important, I discovered her anger and her regret, not that she’d lost her job, but that she’d missed her shot at the man who took it. The injury left her with a wound and an obsession. Both helped her stand out as a character. That made writing her easier. She and Porter shared an understanding of violence, violence tempered by a rough appreciation for justice. Both had been damaged by their histories, and both had healed themselves to the extent that they could. More important, just as a broken bone is stronger along the old break, they each gained a strength Jenny could never match.

Where did that leave Jenny? She remained the heart of the story but she was finally free of the plot constraints created by her relationship with Porter. She could return to her loom, to continue that metaphor, and examine what she had made of herself in the light of whatever self-knowledge she’d gained from the deaths and betrayals. She hadn’t lost anything to Sharon Coulter because Rainbow Porter had never been more to her than an occasional companion, a sounding board, and a bit of comfort when the nights grew too long. What she’d found far outweighed that: a fresh chance with the daughter she abandoned, a renewal with her discarded husband, and even a chance to reconnect with a father who’d never forgotten her.